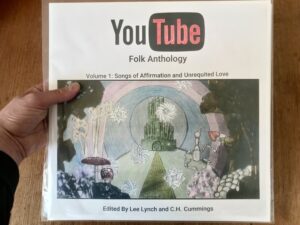 Lee Lynch’s YouTube Folk Anthology is a selection of songs by artists whose music is exhibited and proliferated on YouTube. The project is inspired by The Anthology of American Folk Music, a six volume set produced by Harry’s Smith (1923-1991) a New York based experimental filmmaker who had been collecting folk music and field recordings since he was a teenager. For Raflost’s 2021 edition Lee has created a limited edition set of vinyls for his Volume One edition “Songs of Affirmation and Unrequited Love”, a collection of favorite tracks that he and his fellow artist Christian Cummings have discovered on YouTube over the last decade. The vinyls are in an addition of 5 with covers that feature handmade artwork of a still from Harry Smith’s unfinished 35mm collage animation The Tin Woodman’s Dream. On Sunday at 15:00 at 12 Tónar Lee will be giving a talk on the project as well as screening the videos from the songs featured on the album.

Raised in Redding, California, Lee Lorenzo Lynch (1980) has been making films and art since the age of 13. He holds a BFA in Film from California Institute of the Arts and an MFA in Fine Art from the University of Southern California. His films have been exhibited at FIDMarseille, International Film Festival Rotterdam, Full Frame, The Viennale, Tribeca, and Sundance.