Phase vox is an interactive installation of sound and image manipulated by natural elements. The silhouette of an individual’s face (in profile) is projected onto a loosely hanging white sheet in the gallery. The sheet is installed either outside or by open doors/windows to allow the flow and movement of air to hit the screen and cause ripples and waves to flow across the image. The movement of the screen is captured through a camera and motion detection and the data is used to manipulate the audio of the voice. As people move throughout the space they naturally affect the flow of air in the space. As more people add their videos (captured as part of the installation) then the anomalies of the human voice are played with and exposed as slowly each video repeats the affected audio is captured and played back into the system to be affected by the elements again. 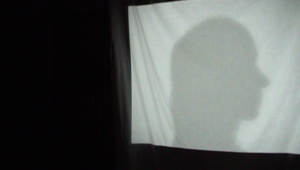 David Strang is an artist who works with sound and interactive elements.His work looks closely at the natural surroundings we live in and amplifes certain aspects to heighten our perception of space/place. Recent work includes site-specifc installation, feld-recording, networks, re-appropriating media objects, hacking and noise. He has collaborated and exhibited with visual artists and scientists as well as exhibiting solo work in the UK, Europe, Russia and USA.He currently lives and works in the UK. www.davidstrang.co.uk