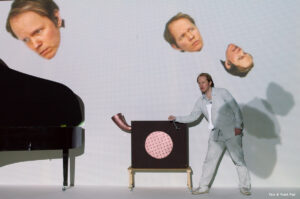 Egill Sæbjörnsson’s video installations consist of real objects, projected video images, often self generative and combined with arduino technology, and sound. He has also a large bulk of work in both performance and music writing. His work can be perceived as a technological continuation of painting and sculpture. Recently curator Hans-Ulrich Obrist described them as an augmented reality work without using the glasses. Egill’s Sæbjörnsson’s work often make us confused and surprised and leads us to pose ontological questions, doing so in a way that both he and we enjoy. His works are known for their lightness and humour and are of an experiential nature, often requiring neither instructions nor education in order to be understood, yet with an underlying seriousness and thought. In his book Stones according to Egill Sæbjörnsson he proposes the idea that art is a species that coexists with humans in symbiotic way. The relationship between what is called mind and physical reality is of great importance in his work. And how emotions, fantasy and reality connect. In 2017 Egill Sæbjörnsson represented Iceland at the Biennale Arte 2017 in Venice, where he let two imaginary friends, the 36 meter tall, people eating trolls, Ugh & Boogar, take over the exhibition concept. His public art piece for the Robert Koch Institute in Berlin is the first permanent, self generative video installation in an outdoor space in Germany. Last year he was nominated for the Ars Fennica Art Price in Finland. Egill Sæbjörnsson studied new media at the Icelandic College of Arts & Crafts in Iceland 1993 – 1997 and in Paris VIII StDenis from 1995 – 1996. 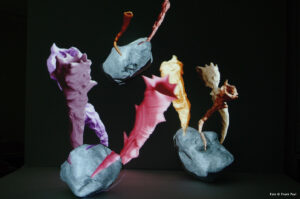 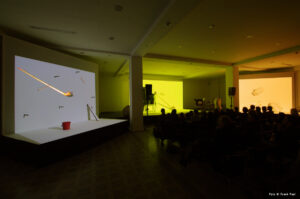