A Journey beyond the Event Horizon

Current scientific understanding posits the existence of black holes throughout the universe. However, it is not completely clear what takes place beyond the event horizon of these objects. This piece is an interactive aural voyage into the unknown. The participant manipulates the user interface and thereby determines the outcome of the piece. 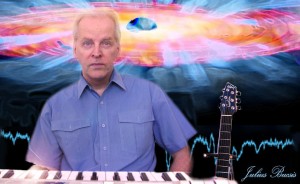 Julius Bucsis is a composer, music producer, guitarist and guitar teacher. He has performed extensively in many styles including jazz, rock, and improvisational music. His compositions cover a broad range of categories including jazz, contemporary classical, and electronic music. Several of his acoustic pieces have been performed by the Relache Ensemble and he has also released two CD’s of all original electric guitar oriented instrumental music.